Here is a great little story about a humble workman's cottage saved from developers. I wish more unwanted old buildings had "angels" like this woman. It is always so gratifying to me to see someone willing to go the extra mile and invest a lot of money and time to preserve and reuse something that is a vanishing part of history.

What I like most about this particular situation was that it wasn't a historical society or preservation organization jumping in to save this little cottage and point out its significance - it was a random person in town who loved it enough to give it a new lease on life. Most people don't have the wallet contents to pull this off, but it's still inspiring. I know if I ever win insane amounts of money on Powerball, I can think of many places I'd want to help save.

At 8AM this morning, the Kestenbaum demo crew started knocking La Ronda down. It is sinking fast. I wasn't there, but lots of other people were. Including some of the Kanias, who I can't believe would even show their faces at this point. See the Save La Ronda homepage and Facebook group and Carla at Save Ardmore Coalition's blog for full updates.

It is still such a breathtaking house, even as it turns to rubble. It breaks my poor creaky architectural historian heart to think of all the Spanish tile, carved stone, groin vaults, plasterwork, and cool old windows being smashed up and dumped in a landfill. Not to mention the genius and labor that went into creating it, and the memories of the many who lived there. Absolutely sickening. What a waste. This didn't have to happen.

I haven't got much to say that hasn't already been said. Now that we're over the cliff, I hope those responsible are happy and at peace. Their big white elephant is on its final voyage out of their lives, their estate-owning dreams are coming true, and their public relations circus is over. I hope that when moving day comes, the Kestenbaums will receive a "welcome" they deserve.

I am a sucker for architectural follies. Here is a very unusual teardown story: A man builds a two-story house out of millions of Legos, the novelty soon wears off, it's difficult and expensive to move, and nobody wants it, so it's gotta come down. It's a cute house, despite its clear impracticality (and very hard bed). It kind of makes me think of Rietveld's Schroder House crossed with Piet Mondrian. One would think Lego (the company) would want to keep and display the house just to illustrate the extreme possibilities of this medium.

Can't they just pull it apart in chunks or sections and store them somewhere? I used to cheat when I dismantled a Lego house - I'd keep wall sections mostly attached so I could save a few steps next time I decided to build something. These guys are just blasting right through the Lego walls and shattering the plastic bricks. Supposedly the salvaged Legos will be given to people who need Legos, but before that happens, I'm just picturing some poor person who has to sit there prying millions of Legos apart, piece by piece.
Posted by Kate at 10:38 PM No comments:

So, two weeks have gone by and the La Ronda story just gets stranger and more pathetic. Seriously, nobody could make this up. This blog has lots of great information - click on the La Ronda tag for all the gory details.

1. Joseph Kestenbaum has been officially outed as the owner of La Ronda. True to form, instead of facing the music himself, he hired a PR firm to express his outrage that his decision to buy and knock down a landmark has generated a "media circus." Poor baby.

I do feel sympathy for his kids, having parents who are publicly revealed to be this greedy and egocentric. As I've said before, there was plenty of opportunity here to do the right thing, or to at least choose a less damaging solution. In his statement, reproduced here, Kestenbaum claims he was the only person willing to buy the place and that he was also willing to sell it once outrage erupted over the demolition permit. But did others have a fair opportunity to buy it from him?

He also claims he and his family had been searching for a new home for five years. Please. Of all the hundreds of luxury Main Line-area properties that have come on the market since 2004, and the fact that even now there are lots of high-end houses stagnating on the market with prices dropping due to the recession, was there absolutely NO other suitable place to buy? Did they even look at anything else, or were they eyeing La Ronda (or La Ronda's location, location, location) all along?

2. Kestenbaum was outed by none other than Arthur Kania, who justifies the violation of what was supposed to be a confidential real estate deal by saying "But he outed me first!" Serves them both right.

3. Kania, who has retained his own PR flack, is now asserting his salvage rights and carting off whatever movable property remains after Kestenbaum's August ravaging of the interior. He has hired a salvage company which has an, um, interesting background.

Meanwhile, the salvage company that reportedly received the primo elements from the August scavenging is not interested in returning them. As seen in this article, the company specializes in recycling salvage as unique furniture and gift items. What oh what will they do with those magnificent staircases? They could be broken up to make a headboard, or some nice garden ornaments, perhaps? And maybe the reuse of this desirable loot will be shown on their new reality TV show on the DIY Network. Just look at all those nice press clips!

4. Given Kestenbaum's refusal to negotiate and Kania salvaging what little of value is left, Benjamin Wohl appears to have given up. Heck, I would too. While technically the house is still standing, it lacks most of its key decorative elements, and has sustained major interior damage during the removal of said parts.

In retrospect, it's unfortunate that Wohl didn't show up early in the summer. Not his fault, since he apparently didn't know about La Ronda until July, but the eleventh-hour timing of his offer undoubtedly made it that much more unappealing to Kestenbaum.

Nice try, Mr. Wohl. Thank you. It heartens us all to see a deep-pocketed total stranger step up and offer to take on such an expensive and complicated endeavor. Keep an eye on the National Trust's 11 Most Endangered Properties and other preservation alerts. You will undoubtedly be needed again.

5. Various people have dug up dirt on Kestenbaum and his wife as a result of the public outing. Fascinating stuff, much of it revealed here, here, and here. Gotta love those photos with the cowboy hat. Now that will fit right in when you move to Bryn Mawr.

Perhaps it is a little juvenile and obsessive to publicize all these tidbits. But let's face it, Kestenbaum's actions are those of an insecure cowardly little man, who is now having a PR-facilitated tantrum about all these mean people who should have bought La Ronda when they had the chance instead of making a fuss about it. He's like Veruca Salt in Charlie and the Chocolate Factory - "I want the world, and I want it now!" Sit and spin, little fella.

If you ask me, Kania is just as much of a skunk as Kestenbaum. Some people think he's a good guy for trying to stop Kestenbaum from salvaging. From my chair, not so much. He is not protecting what's left from harm, but has his own salvagers doing the exact same thing as Kestenbaum's, so he too can profit from the haul. I doubt he's upset about the loss of the house parts illegally removed by Kestenbaum, only the loss of the money he would have made selling them. Not only did he precipitate this entire fiasco by letting the house run down and then selling it to a secretive but clearly demolition-craving buyer, but he aborted any further attempt to pull the house back from the brink with the insistence on maintaining his "salvage rights." He knew damn well what would happen if he made legal provision for salvage rights. Interesting that he didn't try to enforce these rights until Wohl showed up in August, even though Kestenbaum was already well into stripping the interior by then.

I could go on, but I'm running out of sputter.

Disgusting behavior all around. Hopefully karma is as much of a bitch as they all say. I almost hope that poor house will burn down with what's left of its dignity, rather than subjected to the continued picking and scavenging of the vultures responsible for its demise. Twenty years from now, will the key players involved look back and be proud of their actions? I can only hope that the loss of La Ronda will result in stronger future protections for historically significant properties in Lower Merion and the greater Philadelphia area, much as the demolition of New York's Penn Station helped galvanize the national historic preservation movement in the 1960s.

Just to leave one last taste of the stink of this affair, enjoy the last word from Kestenbaum's flunky, courtesy of the Philadelphia Inquirer's Derrick Nunnally:

Kestenbaum's spokesman, Jeff Jubelirer, said Wohl had agreed to the requirements and was attempting a "publicity stunt" by offering further negotiations.

"He hasn't proven or shown that he can execute," Jubelirer said. "You can come up here and do your charade and get lots of press and make us look like the evil guy, but you've had time."

You've had time too, Joe (and Arthur). Oh, the names I could call you besides "the evil guy." 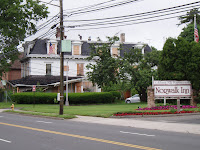 Here is a nice example of maintenance. Shame, shame.
Posted by Kate at 12:55 PM 1 comment: